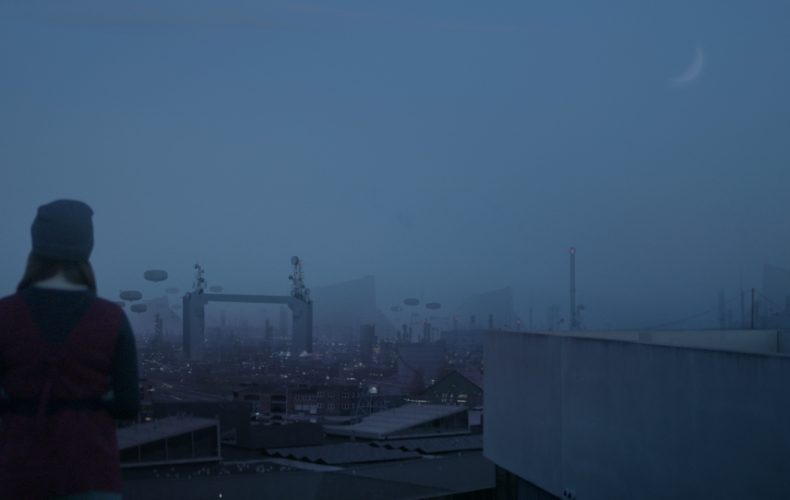 The future literally knocks on the door in 2097: We Made Ourselves Over. It insists on being let in and examined in all its aspects and implications.

Our biggest and most ambitious work to date, 2097: We Made Ourselves Over was inspired by the citizens of two cities and sought to build on the unnerving and exhilarating idea that we all have the power to act and influence the future.

Working in Aarhus, Denmark, the current European Capital of Culture, and Hull the current UK City of Culture – we ran workshops with school kids, young people and the over 60s to ask people about the big questions facing us in the future. We spoke to experts in digital currencies, climate change, artificial intelligence and even a tarot reader to help us sketch out futures that are probable, possible or desirable in a series of expert interview films.

The ideas and challenges raised by the people of Hull and Aarhus set out where we began with the stories for the 2097 science-fiction films. What is it that makes a community? And what are the things that sustain us in the face of change? The films consider the themes and questions raised in the workshops – from death and the idea of transferring knowledge to the young when we die, to machines and how cities grow for the good of the community. 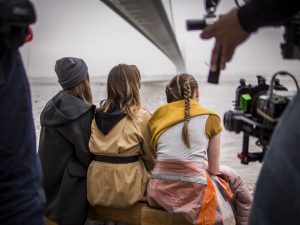 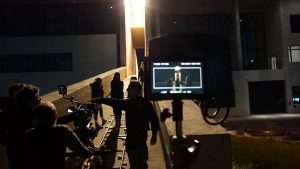 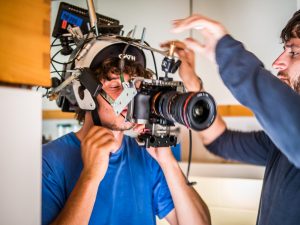 Shot in the UK and Denmark during July 2017, the 2097 films take place at the cusp of the next century and follow the journey of three young girls who must make a decision which will affect their entire city. In the first month of being online, the five films were watched ten thousand times on YouTube alone. 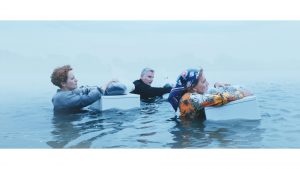 Throughout the summer the project gathered pace; as giant screens at Hull City FC matches flashed futuristic scenes of Hull in 80 years time and mysterious images of phone boxes appeared on people’s Facebook and Instagram feeds – word was spreading that something big was coming to Hull. 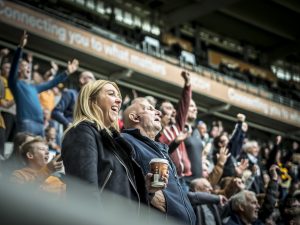 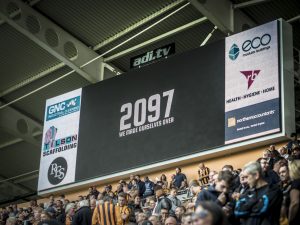 On October 1st the phone boxes of Hull rang together. Queues formed outside the city’s unique cream phone boxes as hundreds of people gathered to wait for the call. The future was arriving and it came to every neighbourhood across the city.

At the end of the line Hessa – one of the three rulers of the future city – asked for your help. From the hundreds of people who answered and the thousands who rang in over the course of the month, hundreds of recordings were made; gathering ideas for the future of the city. 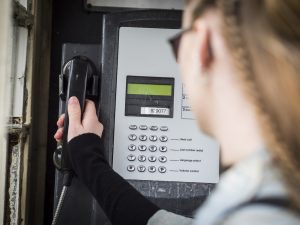 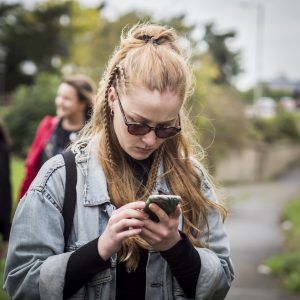 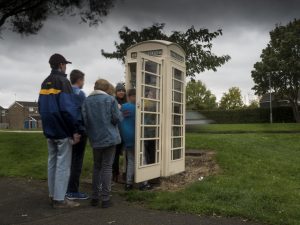 “Very thought provoking, I won’t be around in 80 years but my future family will. It is quite scary where the world is going and how it’s developing and changing. My parents are dead but I’m sure things that are happening today were never thought of, or were they? Technology is fabulous but also advancements sometimes happen so quick.” – 2097: Live in Hull participant.

From fairs, parks and shopping centres to outside pubs, chip shops and post offices – over five weekends people came in their thousands to watch the 2097 films at pop-up screenings across Hull. 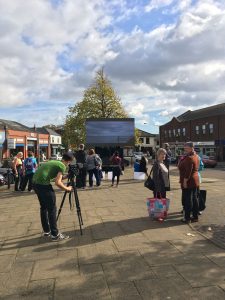 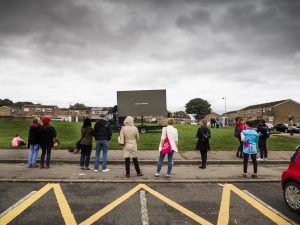 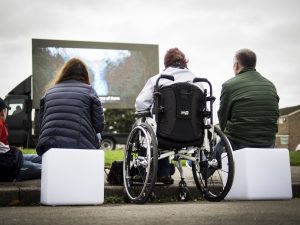 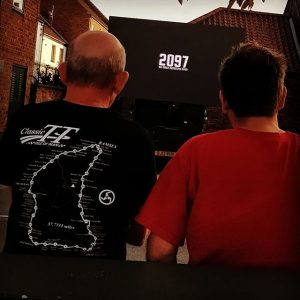 And as the phone boxes rang and film screenings took place, electric cars began a journey around the city, picking up hundreds of passengers from phone boxes over the five weekends of October. Each journey brought passengers face-to-face with a character from 2097; inviting them to reflect on the changes they’d like to see in the decades to come. 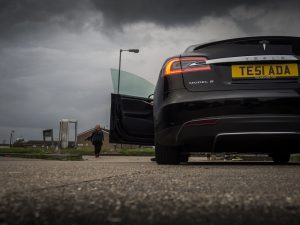 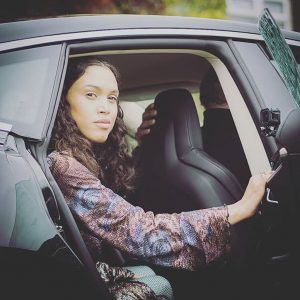 In Aarhus too, we were overwhelmed by the incredible response to 2097, with the first wave of tickets selling out in days and the second and third ticket releases also selling out almost immediately. Every evening from Monday 30 October to Sunday 5 November, a fleet of private electric cars arrived in the city, taking people to a secret location where they were dropped into the science fiction world of 2097.

“The kaleidoscopic view from the covered windows at the rear of the car, mixed with the narrator’s stories and the sleepy synth music makes the future suddenly seem present. The Aarhus, which rolls past the kaleidoscope window, is not the Aarhus I know. It’s a city that suddenly feels strange. A city that has been demolished and recreated countless times of molecular harvesting machines. A city where memories are transferred from the dying to the living as ink droplets in a glass of water.” – Ask Hastrup, 2097: Live in Aarhus participant, Kunsten-nu. 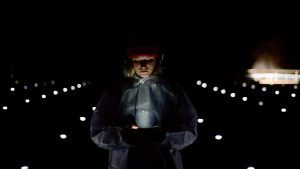 Exploring tunnels, stairwells, and floodlit spaces using a handheld audio GPS device with voices from the future, a story is slowly revealed : “I get to a staircase, and from there I go up under the open sky again. Here I am greeted by an overwhelming sight. What looks like hundreds of little light spots shine on the otherwise large, dark space that I have to explore to put together the jigsaw puzzle.” – 2097: Live in Aarhus participant, Fine Spind. 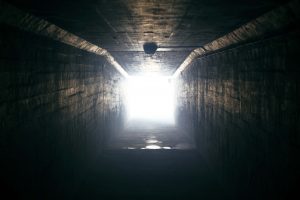 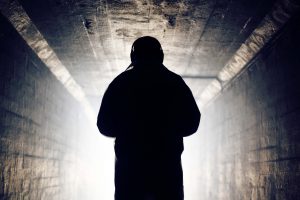 “Alone with the beautiful electronic soundtrack in my ears, I move on into the tunnel. At the end a bright light shines. In the headphones I am introduced to Hessa. She tells me that she has gone where I am now walking, many times. She can remember the walls, how they feel, and how one’s hands feel when they touch them. I turn left at the end of the tunnel and enter the cold evening air. Out into 2097″ – 2097: Live in Aarhus participant, Vink Aarhus.

Finally coming face-to-face with a character from the future, participants were asked to reflect on their desires for the coming century: “The future is where you and those you care about will spend the rest of your life. And what the future looks like depends on the choices you make”  – Ask Hastrup, 2097 participant, Kunsten-nu.

“Made me think, we are all small but can create changes in everything…” – 2097: Live in Aarhus participant.

2097: We Made Ourselves Over is a Blast Theory work co-commissioned by Hull UK City of Culture 2017 and Aarhus European Capital of Culture 2017 in association with KCOM.